The Dignity Ride: Shedding Light on a Broken System 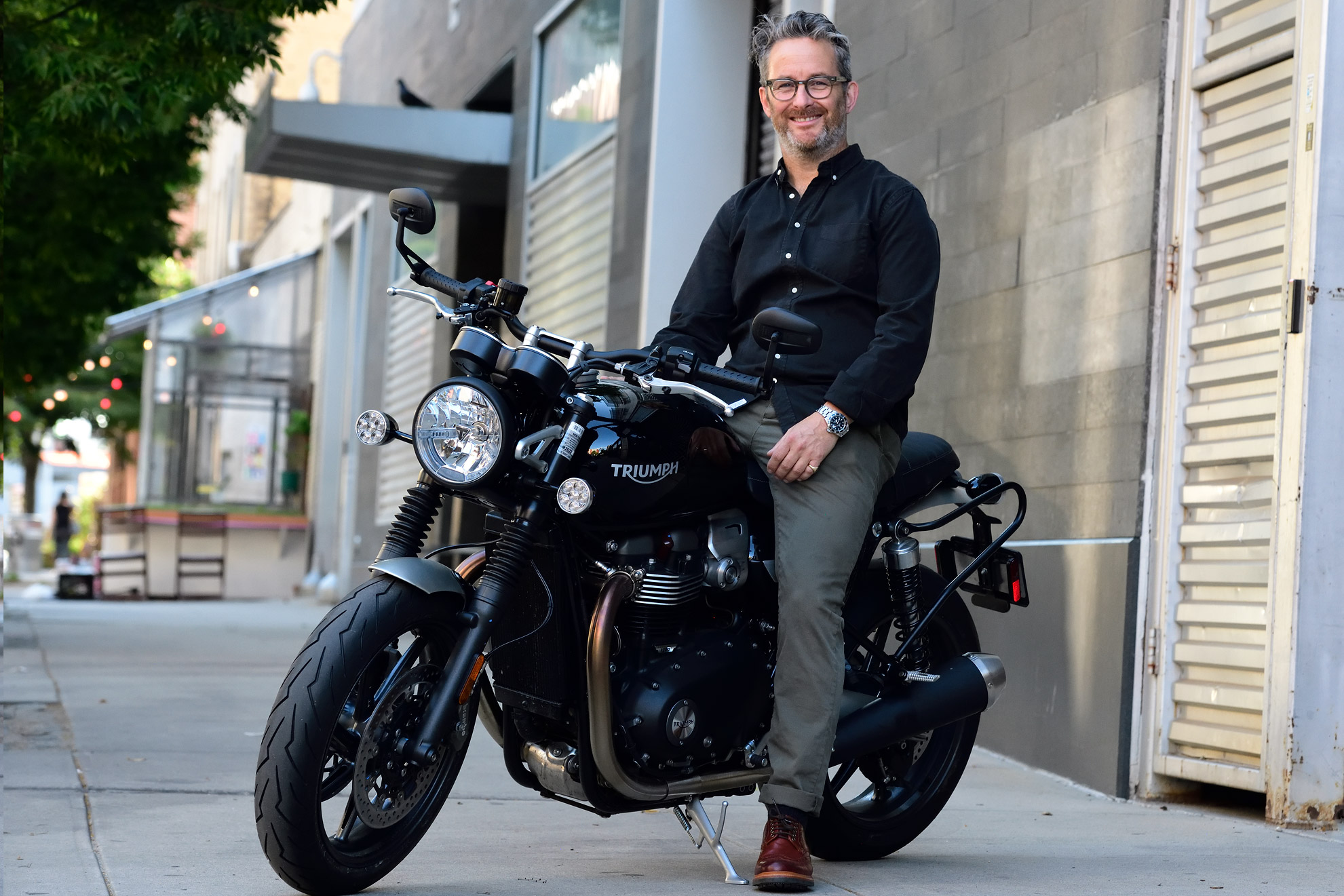 It’s hashtagged #rideagainstracism … but The Dignity Ride is as much about shedding light on the inequities in the American criminal justice system when it comes to persons of color as it is about taking action to help disaffected youth who need a second chance when re-entering society.

Set for Saturday, June 26, the fundraising and educational event is the brainchild of Getting Out & Staying Out (GOSO) executive board member Robert Harwood-Matthews, and includes elements for local motorcyclists and cyclists as well as a block party hosted by Greenpoint-based Gotham Depot Moto garage (g.d.m.).

“Getting Out & Staying Out could not be a more relevant non-profit,” says Harwood-Matthews, an eight-year GOSO volunteer who will lead the motorcycle tour on the day. “We serve young men 16 to 24 who have had an encounter with the criminal justice system in New York. It starts with outreach work in Rikers but is fundamentally about re-entry and reducing recidivism through employment, education and empathy.”

The 50-year-old British transplant adds GOSO works to change employers’ minds about this hard-working, reform-oriented, and oft-neglected segment of society.

The GOSO vision is “a world where neither a person’s race nor contact with the legal system determines their future.”

We serve young men 16 to 24 who have had an encounter with the criminal justice system in New York. It starts with outreach work in Rikers but is fundamentally about re-entry and reducing recidivism through employment, education and empathy.

GOSO’s efforts “to end the cycle of incarceration” have seen proven results since the program was founded more than 17 years ago. Over that time the non-profit has served more than 10,000 young men, with less than 15 percent of participants returning to jail or prison, compared to the national average of 67 percent.

“We have had lads go to Columbia University, become fathers, take up management roles with employers like Dos Toros … and the impact on their communities is palpable.”

Participants can be currently or formerly incarcerated youths, be the subject of an open case, be on parole or probation, have been stopped or arrested by law enforcement, or simply feel vulnerable to arrest due to over-policing in their neighborhood. Ninety percent are Black or Latinx; 65% lack a high school or equivalency diploma; 50% suffer insecurity at home or homelessness; and a stunning 70% have no prior work experience or marketable skills.

Services offered run the gamut from legal advocacy -- including written letters of support for open court cases and parole hearings -- foundational support to aid emotional well-being and family connection while a youth is incarcerated, and future planning to create educational, employment and other life goals for the post-release realities of life. 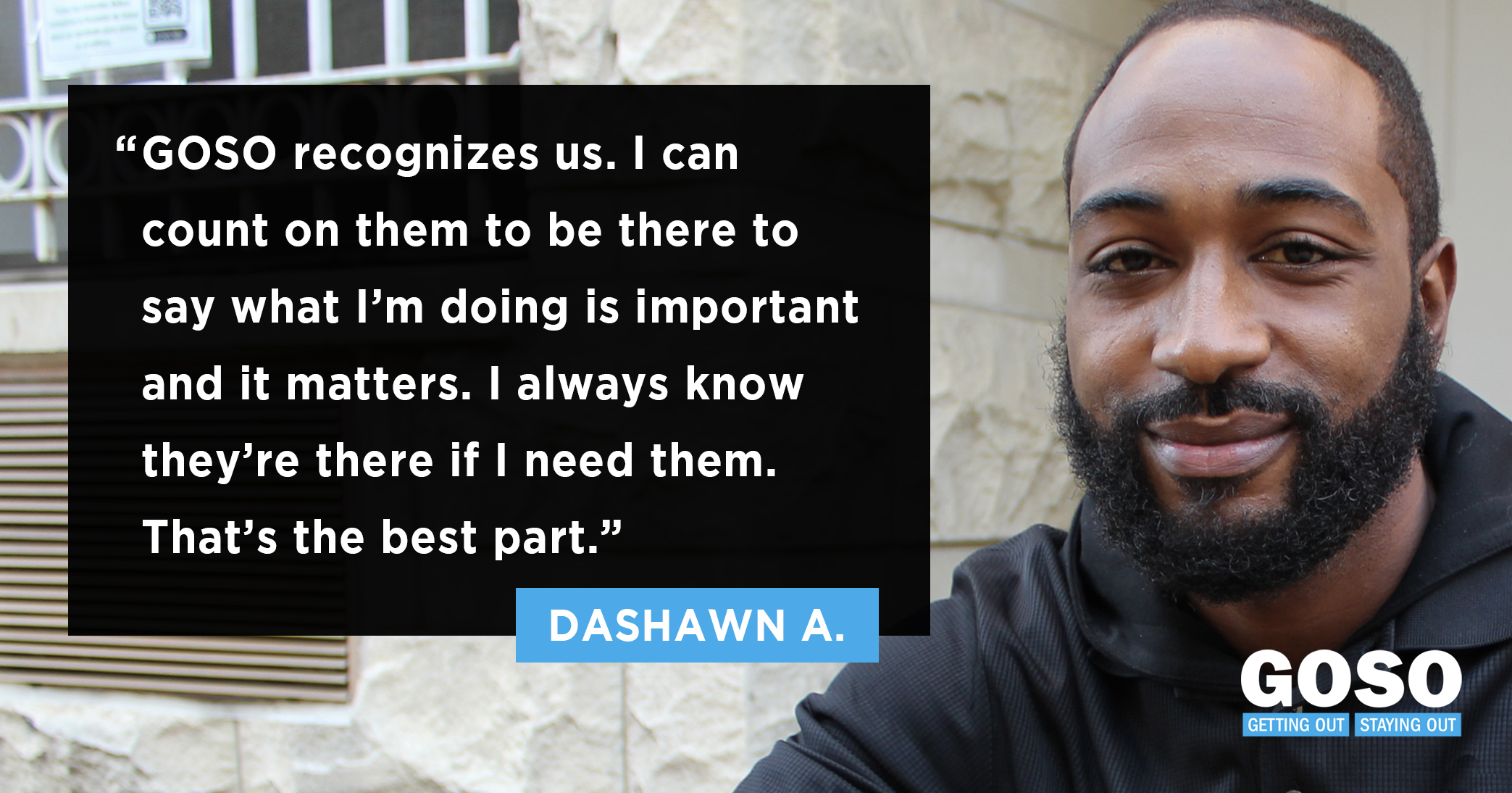 Getting Out & Staying Out success story Dashawn A. — GOSO

One such success story is Dashawn A., who discovered GOSO in 2014 while completing a year-long sentence on Rikers Island.

“I didn’t have money for a top-notch lawyer who could prove my innocence,” Dashawn says, adding he had felt racially profiled by police back into his teen years. “I was forced to take a plea bargain, or risk going to trial and end up serving an even longer sentence, risking more years lost, away from my friends and family.”

The program quite literally gave him hope for the future, and a plan for when he returned home. GOSO offered Dashawn mental health counseling, job readiness training, and help furthering his education. His first job was as a baker’s assistant through the GOSOWorks employment program, and he also enrolled in college to study criminal justice. Dashawn is now pursuing his Associate’s degree in audio production online through the Los Angeles Film School, hoping to explore his passion to work in TV or music.

Last year, during the COVID-19 pandemic, Dashawn was hired as a SAVE Social Distancing Diplomat and is now a 'credible messenger' in his community.

“I know I’m having an impact because I go out every day and I don’t judge anyone. I provide face masks, hand sanitizer, and other resources to anyone in need. They can see that there is no discrimination and that we’re genuinely here to help.” 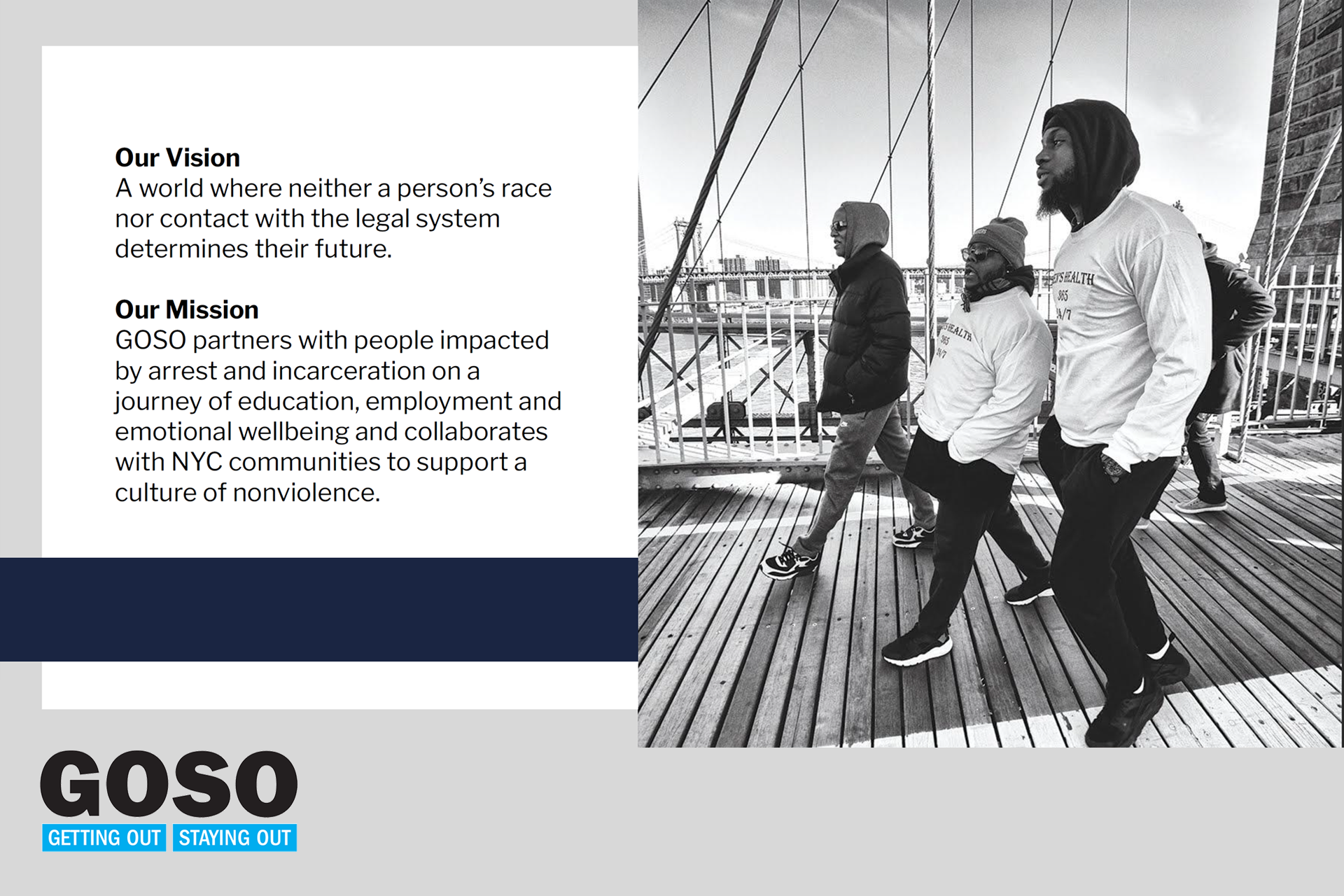 Getting Out & Staying Out Vision and Mission — GOSO

For Harwood-Matthews, The Dignity Ride (details in sidebar) is not just an opportunity to raise funds in support of GOSO’s programs. it is more importantly a chance to have participants follow the journey and experience a brief moment in the lives of those the program advocates for and improves the lives of.

A motorcyclist for more than three decades, Harwood-Matthews cut his teeth on roads in the UK, Europe, Africa, Japan and North America. He currently rides a Triumph Speed Twin and a ZX6R / former AMA bike on the track, and a is an active member at g.d.m.

“I guess I just followed the notion that bikers love to get together, especially this summer,” Harwood-Matthews says, adding he took a page out of the Distinguished Gentleman’s Ride and its success raising both funds and awareness for a cause. “The dignity part is the journey that we'll go on, if you sign up and ride with me. We will see the horror of Rikers bridge, imagine crossing it as a young man; we will see hope at GOSO's new HQ, and dignity at a typical employer. NYC Horticulture, Dos Toros, Ovenly, Nick & Son's Bakery in Williamsburg … all employ or have employed our guys.”

He adds: “There are good kids, bright kids, strong young people, people dealing with some really tough stuff all around us. Sometimes we have to listen, reach out, acknowledge our own judgments and help. Nothing beats meeting one of our guys after they get a job, and nothing is more depressing than paying for a call from a private jail and having someone ask you to buy them some deodorant on the jail website.”

The dignity part is the journey that we'll go on, if you sign up and ride with me. We will see the horror of Rikers bridge, imagine crossing it as a young man; we will see hope at GOSO's new HQ, and dignity at a typical employer. NYC Horticulture, Dos Toros, Ovenly, Nick & Son's Bakery in Williamsburg … all employ or have employed our guys.

Harwood-Matthews, an executive director with the NYC-based marketing & advertising firm Mindshare, also serves on the board of Stand Against Violence East Harlem which is a GOSO-affiliated organization sending 'credible messengers' into escalating situations to get people to put guns down.

"When I came to NY with a big job, I wanted to give back, had some experience with young offenders in London and started looking around. I've always empathized with guys that have made mistakes and admired those who pulled themselves out of it. I'm not an ‘ACAB’ guy ... that's too much … there are good and bad guys everywhere if you look. But I do think the system is stacked against you -- if you grew up in poverty and are of color, it's a lottery. My first job at GOSO was ripping subway maps out of calendars, we had sent them to Rikers to give the guys optimism about an appointment when they got out. Rikers said they were a threat as people might use them to escape … idiocy, that kind of thing just spurs me on. GOSO has always had this magical energy, people get lifted up, given hope and practical tools. The rest is on them, and they respond.”

With The Dignity Ride, Harwood-Matthews just wants “people to have fun, be safe, help us raise money and learn a little about what really goes on all around us and what a difference GOSO makes to the guys, their families, and their kids.”

Event information and signup/fundraising links for the day are as follows:

More info on GOSO: gosonyc.org
Sign Up for The Dignity Ride: thedignityride.splashthat.com
Or make a donation online: classy.org/campaign/the-dignity-ride/c334816 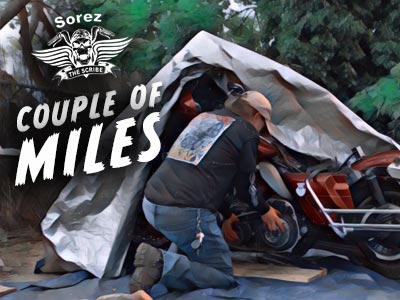 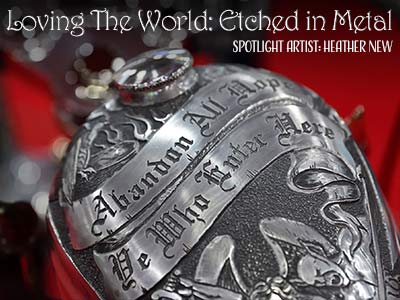 Loving the World: Etched in Metal

Getting Out & Staying Out (GOSO) is a non-profit providing education, employment, and emotional well-being to justice-involved men in NYC. For over a decade, GOSO has been transforming lives and transforming re-entry. Whether you're on a motorcycle, bicycle, or you're on two feet, join GOSO and Gotham Depot Moto for a ride to remember.

Join GOSO Board Member Robert Harwood-Matthews for a guided tour to learn more about GOSO and justice reform in NYC. There will be several stops: from GOSO's new HQ to one of the group's amazing employment partners to the Rikers Island bridge.

Join the GOSO Action Board for a bicycle caravan to #RideAgainstRacism. In 2020, bicyclists helped lead and protect protesters all over the country. Now, grab your bike (or a Citi Bike) and be a part of GOSO's mission to transform justice in our city. Ends at Gotham Depot Moto, 51 Box. St. Brooklyn NY. (There is a Citi Bike port 1.5 blocks away from Gotham Depot Moto.)

The community celebrates GOSO. There will be places to get food and drinks, plenty of good music and good vibes, and ways to learn more about GOSO's transformational justice work. All are welcome to join the GOSO family. This is a free event, with donations encouraged, music provided, and food/drink available on the block.